A remote farm on a dusty road outside the Upper Hunter village of Kayuga is the ‘heart home’ of Port Stephens sculptor and poet Carole Driver.

Her native England and years of living in Canada and New Zealand all stirred her creative spirit.

But it was a three-month farm sit on a property owned by long-time friends that resonated most deeply and inspired her latest exhibition, Bright Birds Singing. The exhibition is showing at Muswellbrook Regional Art Centre’s Wollemi Gallery until October 22.

“Some places speak loudly to you, while others softly insinuate themselves into your heart,” said Driver.

“That’s how Kayuga is for me. It’s my heart home.

“It has the deep silence of an ancient land, punctuated by the tracery of birds calling overhead and the thump, thump, thump of a passing mob of roos.

During her stay, Driver was ‘hobbling around on walking sticks’ prior to hip replacement surgery. Despite the discomfort, she had never been so happy.

“It was extraordinary what happened to me in those few months,” she said.

“The drawings and poetry just flowed out.

“The connection with place is deeper at Kayuga than anywhere else I’ve ever lived and I have the same experience every time I go back there to visit.”

Bright Birds Singing is the product of five year’s work.

The exhibition is in two inter-connected parts: her original drawings on rice paper lead visitors into a quiet space housing dramatically lit ceramic sculptures. The large wall installation of a choir of part bird, part human Bright Birds represents “a kind of transcendence over the earthly tragedies of humans and animals”.

The farm’s two retired stock horses Billy and Harry feature in the pieces and became unlikely muses for the early drawings.

“Like me, dear old raggedy Bill was a bit arthritic, but very intelligent and funny,” said Driver.

“Bill could unlock any gate with his bum and he would always visit me if I was near his paddock. I didn’t expect to be inspired by the scruffiest horse in the Upper Hunter!”

Also forming part of the exhibition, Driver’s Gone Before figures depict spirits she sensed around her at Kayuga as she sketched. (Coincidentally, the Kayuga Cemetery is the oldest recorded cemetery in the Upper Hunter, first gazetted as a burial ground in 1828.)

“As I meditated, it seemed the most natural thing to listen to the land,” says Driver.

“I had a strong feeling that there were these other presences and I came to think of them as the spirits of people who had walked that land before me – perhaps the original Indigenous people or the early white settlers.

“They just kept creeping into my drawings, so I started making them in clay sculpture and developing experimental glaze surfaces for the figures.

During the Kayuga farm sit, another seminal moment for Driver was attending the visiting exhibition in Muswellbrook of Arthur Boyd’s The Lady and the Unicorn print series, one of several collaborations between Boyd and Brisbane-born poet Peter Porter. Boyd and Porter were among the legion of artists and writers inspired by the ornate six panel series of silk and wool tapestries created in France in the late Middle Ages.

Looking back, Driver says the exhibition was another catalyst for Bright Birds Singing.

“I was quite overcome by the level of expression Boyd had achieved in his drawings – particularly his depiction of the unicorn that was ultimately betrayed by the noble woman,” Driver said.

“Both the prints and poetry of their exhibition really stuck with me. It was difficult to look at another piece of art for some time, which is unusual for me because I like to absorb all forms of art.”

“Later I decided that I wanted to exhibit in the gallery where I had experienced the Boyd-Porter series.

“It’s such a beautiful, contemplative space. It means a great deal to me to show the work inspired by Kayuga there.”

Driver arrived in Australia in 1995. Always drawing as a child, she attended art school in Hertfordshire and ‘persisted with painting’ although it didn’t come naturally. It was not until she and her husband Alan Gomersall, left England and migrated to Vancouver in Canada and she had their son, that she turned her hand to sculpture at the city’s artists’ hub, Main Street SOFA.

“It was a lightbulb moment,” Driver recalls.

“All the practical, technical things like modelling and seeing and thinking in 3D all came so easily.

“It was as if I had spent a lifetime as a sculptor. I never looked back.”

Canada’s cold winters and lure of family in Australia eventually saw the family move to Queensland where Carole completed a Masters in Fine Art at QUT.

Later moving to Sydney, she taught sculpture at the Workshop Arts Centre in Willoughby doing installations and performance-related work – “all sorts of fun stuff” – for 11 years. She and her students worked on larger pieces in Bicentennial Park, part of the Olympic Park precinct at the turn of the century.

Now aged 74, Driver now prefers to work with architectural spaces using smaller modules to produce a bigger work, as with Bright Birds Singing. Describing herself as ‘basically a modeller’, she has devoted the past decade to exploring clay and ceramics, pushing boundaries and creating surfaces that become not only an integral part of the form, but change the original form to something new.

Driver was delighted to see so many young people at the opening of Bright Birds Singing.

“It’s important to pass on the love of art to a new generation,” she said.

“If I can pass on my passion for sculpture to just one person, that’s what teaching art is about, just as Boyd’s work was a catalyst for me.”

The only sad note for Driver is knowing that her ‘heart home’ will be impacted by mining.

“With the mines encroaching on that area now, inevitably it must change,” she said.

“This exhibition was a chance for me to say this is what we have here and it is so very beautiful and magical.

“I can see both sides: I know the world changes and we need energy, but I’m saddened that this remote, wonderful place is going to be affected.

“The birds will find other places to sing and the roos will find another way across the country, but for me the magic will be lost.” 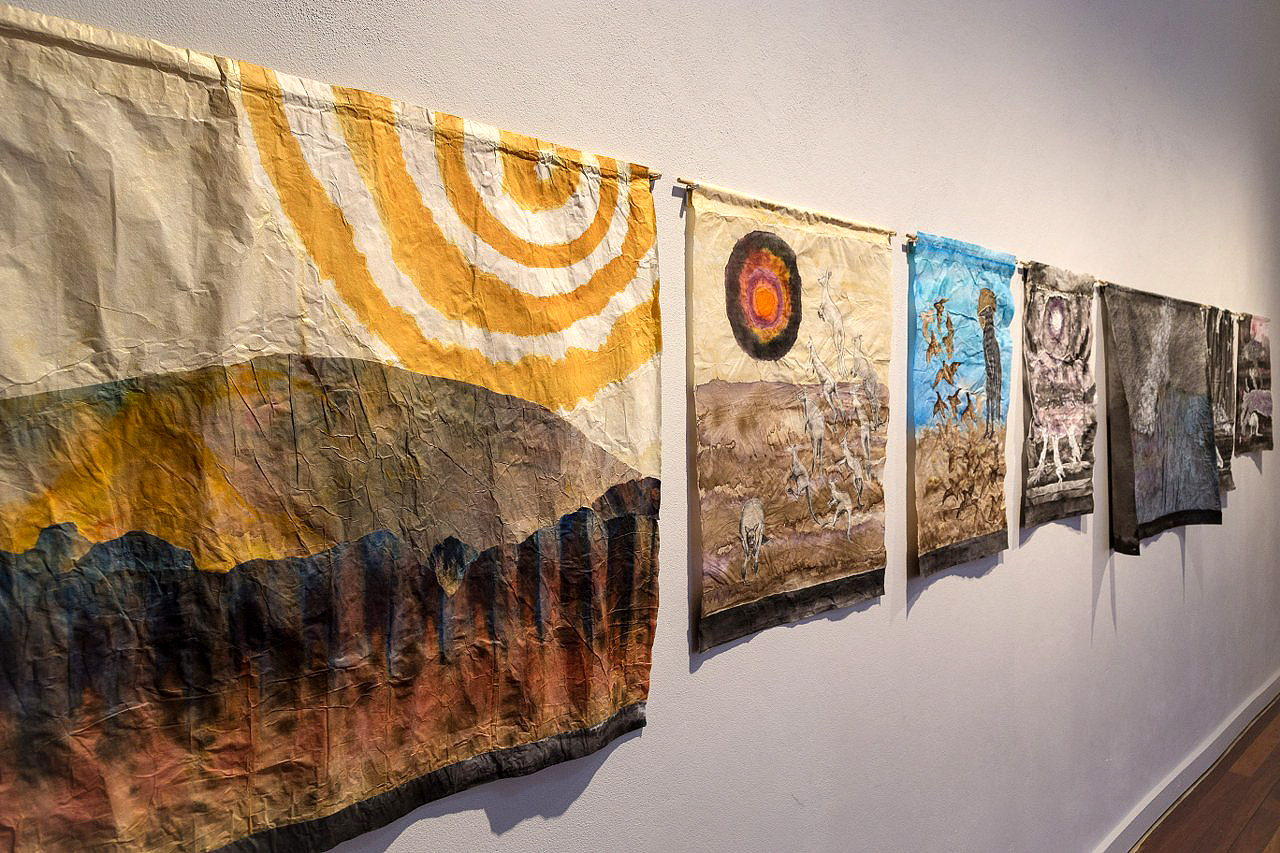